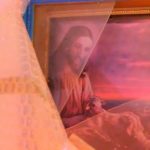 Domenico de Clario is an artist who values the process of creation as much as the outcome.

His installation “conversazioni con les estrellas” (“conversations with the sky”) has converted a room of the La Trobe University Visual Arts Centre into a virtual workspace, storage space and memory chamber.

“I’m much more comfortable with the idea that the work makes itself. This could be anything, it’s meaning has to be imparted by how others might relate to this. In a way it’s an open page, it’s an opportunity for people to engage with something,” Domenico says.

The work invites deep inspection, with hundreds of objects that are o

ften as unique as they are mundane.