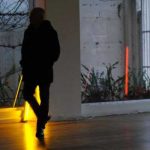 Think what it would be to have a work conceived from outside the self, a work that will let us escape the limited perspective of the individual ego, not only to enter into selves like our own, but to give speech to that which has no language, to the bird perching on the edge of the gutter, to the tree in spring and the tree in fall, to stone, to cement, to plastic … Was this not perhaps what Ovid was aiming at when he wrote about the continuity of forms? And what Lucretius was aiming at when he identified himself with that nature common to each and every thing?

Italo Calvino, Six Memos For The Next Millennium, 1984

This someone is young, and arrives for the first time in Mildura from the other side of the world to map this city, which was serendipitously conceived in a utopian dream the century before last.

The current structure of the city is available freely to the public, but through this particular mapping process the recently arrived someone also tries to uncover a small secret he believes each city possesses.

Once this unique secret is uncovered it can, he believes, explain the essential, unrepeatable qualities of the city itself; the reason for its existence, its ancient origins, its future ambitions, even its penumbral darkness.

Part of the reason this young someone has travelled to Mildura is to come to visit a much older someone who for a very long time has believed the very same things about cities and their relationship to whatever lies above and below them.

This older someone, upon seeing the maps, perceives that the buildings and houses as well as the spaces in between them read like a notated musical score.

This notated score, ably disguised as a map, indicates the sound that the voice of the city might make; its notes and its timbre as well as the silence inherent in its vast open spaces.

There is one book in this library they both particularly refer to***; this book has allowed them to dream that one day someone might somehow be able to manifest all these various relationships in an experiential form.

And then they both realize that their coming together in a small city on the outskirts of the Australian desert country has facilitated an attempt to create that very outcome; they move towards this outcome as one.

Alessandro (the younger someone) has notated the map of the city of Mildura in a series of marks that appear on the sheet almost as hieroglyphs; certainly as an idiosyncratic alphabet, describing both the structure of Mildura’s built environment and one’s possible meanderings through it.

I (the older someone) interpret these marks as the notation I read in order to manifest it as various keyboard sounds; this reading takes in the spaces between the marks as well as the marks themselves, which I then instinctively transmute into the hitherto unheard sound of the city.

The result of this collaborative project is what we are delighted to present to you this evening: the mapping of Mildura as a series of hieroglyphic marks interpreted as sound notation.

Just imagine that each sound and each note you hear, as Italo Calvino entreats us, corresponds to a wall bathed in sunshine, a footpath, a tree, a tall building or a garden shed; the frequent silences to parks, gardens, vacant lots, vineyards, empty tracts of urban land…

We hope that sitting and listening to such sound might facilitate wonderment about how each of us perceives the world around us and how we might share our responses with our fellow travellers on this strange human journey.

The process by which we have arrived at this present offering pays both a respectful homage to the mysterious practice of mapping songlines and constitutes a pale shadow indeed of its most ancient progenitor.