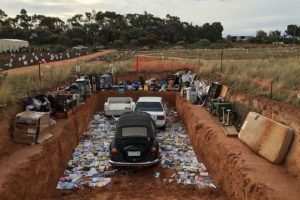 More than a lifetime of a family’s possessions, placed neatly in a pit the size of a swimming pool, are being used in a ceremonial burial as part of an art installation near Mildura.

Many objects are from past art installations, including Mildura’s Palimpsest festival and international events.

“The interment, or burial, of all the objects I’ve used in 30 to 40 years of installations, as well as furniture, clothes, letters, books, my children’s toys, parents’ possessions, and various bits and pieces from my life that are no longer in use,” he said.

“The desire is for everything to stay together and safe under the soil, so nothing has gone to the tip or has been discarded or destroyed — it’s really important for me that everything can stay together,” he said.

“There’s a relationship as well about what’s under the earth, what’s above the earth because eventually the mound that covers the burial site will be planted with trees.

“Then there’s its relationships as well with the sun, the earth and the moon, in terms of when these events occur. The first one was on the winter solstice, and then the equinox and then the last one in November will be on the new moon.

“There’s a relationship, I believe, between what happens in the sky and what happens to us down here and our bodies.”

The artist said his car had become impossible to see as a working car after it was used in many art installations.

“My car I had for 35 years and I think you develop a symbiotic relationship with the car you drive everyday — it sort of became an extension of my body,” he said.

De Clario said the installation was not because he was at a “transition point in his life” but more that it was time to “say goodbye” to items he had carried with him or stored for decades.

“It’s probably more got to do with the passing away of both of my parents in the past two or three years, and I think it’s probably time to let a lot of things go,” he said.

De Clario said his parents had been collaborators in many of his projects over the years, including at the Australian Centre for Contemporary Art.

“I re-built the house we lived in in Italy before we migrated to Australia inside the museum and lived in it for two weeks, made food for people and talked about what our lives were like before we came to Australia,” he said.

“They would probably be delighted that the work has gone on beyond their stay on earth and the objects that were part of their lives are with mine and with mine in this interment.”

“I wanted to time these events to time with what happens up above us,” de Clario said.

“The second stage is now — the interment. And the third stage will be creating a mound over the top and planting seven trees on November 29, on the new moon, which is considered to be an auspicious time for planting and the launching of new lives, and new projects.

“Seven is a significant number because I have constructed a number of my projects with the number seven to align with the number of energy centres in the human body. The trees will all be local to the area including a lemon, an orange, a Cypress pine, a grape, an almond and a Casuarina pine.”