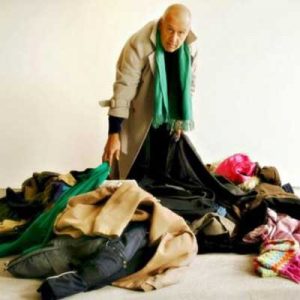 FATHER’S COAT WAS bought in the winter of 1963 at the Leviathan Building in Bourke Street. The label stitched inside confidently announces “It’s a Man’s World at Leviathan” but old father is no leviathan – in fact he has shrunk in recent years. The coat, now mine, would swamp him.

It speaks to me of home, this thick, charcoal, Italian-made overcoat. It holds something affectionate and paternal in its seams, with its protective, slightly bristly outer surface and its soft satin lining, now old and frayed. It offers comfort and security with its history, its warmth.

Domenico de Clario is wearing an equally superb overcoat, also a hand-me-down (from a friend), on this grey winter day. He says it has some moth holes but it looks to be in superb condition and he wears it well.

Clothes can carry deep emotional nuances in their folds, stitches and pleats, patterns and hues. In the way they are worn, their textures, they reveal much about a person. Garments can hold memories, too, and histories, though we often don’t know it. De Clario loves investigating such territory, so it is no surprise that this man, who has been doing his affecting other-worldly installations for the past 40 years, should be involved in two projects that deal in some way with clothing and the idea of home.

This artist-philosopher (now head of the fine arts department at Monash University) turns up in interesting locations, regularly. Some will remember him at the Australian Centre for Contemporary Art in 2005. There, he constructed (and regularly inhabited, with his parents Graziela and Mario) a life-sized two-storey representation of the apartment building that housed his family in Trieste before they migrated to Australia in 1956. It was an archaeology of memory and feeling that was phantasmal but cosily domestic.

I also recall seeing him – or his silhouette, at least – in a glowing tent in the full-moonlit gardens of the Heide Museum of Modern Art, in the early hours of an icy morning in mid-1995. He was doing one of seven performances for a project called seven-ness: sublunar, in which various sites and objects around the gardens were lit like glowing jewels or chakras. He was playing a piano beautifully.

De Clario has created many other events in between, and at various times his art pieces have been explored – performed is not quite the right word – in factories, foundries, gardens, even a sports and recreation centre, and, of course, at many galleries, large and small, in Australia and abroad.

Today, he is preparing to wear and work with coats collected at MARS (Melbourne Art Rooms) in Port Melbourne, and he has just completed an installation at the Albury Regional Art Gallery, which involves paraphernalia, including clothing, discarded by migrants at the decommissioned Bonegilla Migrant Camp.

De Clario’s MARS project emerged from one of those moments of serendipity that so often can provoke an art event. The gallery’s director, Andy Dinan, had been telling him about her “Off Your Back” scheme, started with a group of friends four years ago, which encourages people to drop off their old coats for the homeless. They are dry-cleaned, delivered to the StKilda Crisis Centre and distributed on the street – on to the backs of the homeless – within 48 hours. So far this winter, 4500 coats have come in, with about 20,000 since the scheme started.

De Clario was so enthused with the idea, he offered to create an art event around it, responding to each coat’s individual possible history and the act of it being passed on to someone in need.

When he arrives at MARS on three consecutive Sunday afternoons in September, De Clario will personally inhabit each of the coats gathered during the previous week (about 60 or 70). He will wear each coat for seven minutes, during which time he will respond by making a drawing, writing or reading something from several sources he brings with him; he will make music, sing or even gaze out the window.

This new “history” for each coat will be entirely improvised. After each afternoon’s “wearing”, done according to the Tibetan Buddhist principle of Tonglen – breathing in pain, breathing out ease – DeClario will pin up all his responses on the gallery wall, alongside a description of each coat. And at the end of each week, he will hand-write a message to the new owner of the coat. He carefully folds the note, along with the reading text and the drawing, and leaves them in the pockets of the coat for the new owner to discover and perhaps ponder.

This beautiful, generous ceremony is part of De Clario’s larger-scale project for helping to “humanise the world” by making art something more personally meaningful, more experiential than “the art object as an end in itself”. He is deeply interested in how he can make objects – in this case, the coats – more than simply “the visible container” and to bring a mindfulness to the wearer.

“This passage through many layers of our society is of great interest to me,” he says. “What constitutes wealth, and to have? What constitutes to not have? There’s often such a fine line between the two. As an artist, I can engage in that process and often it is an area that is beyond rationale and theory, but an area I find fascinating.”

Dinan has seen this progression through the layers of society when she has acquired the coats at MARS. “Some ladies came in for coffee in the gallery and I thought they were giving me their coats, left in a pile on a table, and thanked them,” she says. “They laughed and said they had just taken them off … but by the end of the coffee, they decided to give them to us!”

Another time, a man brought in a very expensive cashmere coat. “As he gave it to me, he went through the pockets and found a letter with his deceased dad’s handwriting and started crying. Often we spend hours with these people who come in, debriefing about the coat and the memories with it – it’s as much about the giving as the sending-on to the street people who need them.”

De Clario’s other (two-year) project at Albury Regional Art Gallery and the National Trust-listed Bonegilla Migrant Camp also explores notions of identity, homelessness and the idea that global culture is composed of individual, minority voices. In this case, those voices are embedded in the objects and documents left behind by the thousands of European migrants who were interned at Bonegilla between the late 1940s and 1971.

De Clario will be using those objects – photographs, suitcases, letters, clothing, bicycles and so on – in an installation that he says democratises each object. “So many Australians have passed through there,” he says. “There are clothes that people brought from their country: folk clothes from that era, all sorts of embroidered shirts and pants. Amazing things, a treasure trove of memories.”

The consistent element he has discerned while sorting through the archives is the tremendous hope that was given to people in Europe, which they projected onto this land of opportunities.

“And then, the reality of these camps. Despite the fact that they had been through a war, they had lived in comparatively sophisticated societies, especially people who came from the cities. And to end up in this group of steel huts with no heating or cooling, a daily diet of mutton … the most common story is the stench of mutton right through the camp.”

As well as the depression and disappointment, he also uncovered many stories of gratitude and great expectations. His own family did not, like many, get on the train at Station or Princess Pier and go straight to Bonegilla. The De Clarios had a cousin in Smith Street, Collingwood, who had a room for them when they arrived.

Indeed, the underlying theme to the Bonegilla work – and the MARS coats project – is the very idea of what constitutes home. “What is home, how do you manifest both the longing for home and the constant disaffection with it?” he asks. “No home ever seems to be the home you are looking for. It is the fate of every migrant to be in that state. All of us here in the last couple of centuries – there’s a sense of us being guests in this country and clearly, metaphorically, hanging on to the edges of the land.

“We have to make our home wherever we are. In a way, these coats (at MARS) will become the home for these people. I am trying to give that home a kind of warmth, or a nurturing, which perhaps might extend beyond the physicality of the coat itself.”