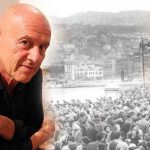 Questions about migrants and identity.

Art is sometimes about pushing boundaries and subjective interpretation, and having your head shaved to get people thinking about cultural backgrounds and how they affect our lives is a particularly bold example of one of these times.

During the 1950s and 60s, the Illawarra saw a boost in immigrants coming from Turkey, Lebanon, Vietnam and South East Asia.

From the 1990s to the present they have also come from China, the Middle East and Africa.

The Generations exhibition at Wollongong Art Gallery featured 11 artists, all who have a cultural background in somewhere other than Australia.

Two artists did something very different to get their message across last week.  For his installation, artist Domenico de Clario shaved his female colleague’s head while singing Waltzing Matilda in Italian.  After the shaving, the colleague then sang a verse in English.

“The point is to be asking a question about identity, appearance and the difference between cultures and genders,” Domenico said.  “There are marked differences between us – age, gender and cultural disposition.  “It’s the beginning of a questioning process rather than making a point about anything specifically.”